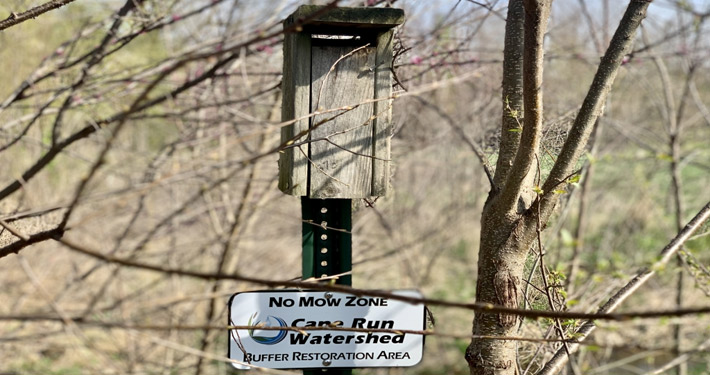 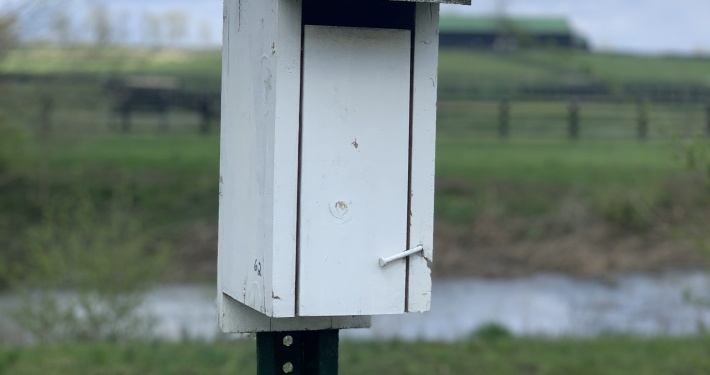 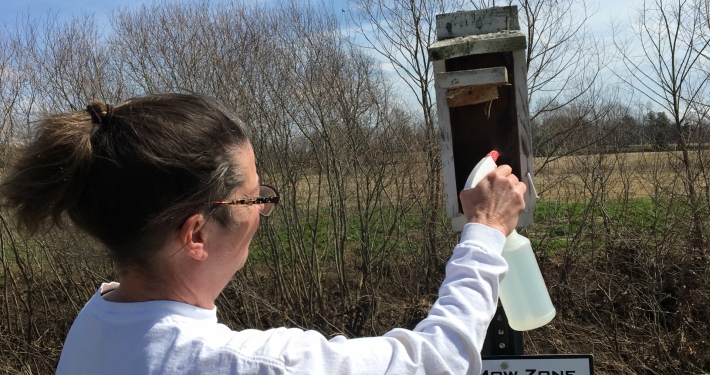 Who doesn’t love the sight of horses at the beautiful Kentucky Horse Park? But the next time you walk around the Park, look closely and you may see a flash of blue and the trill of a song. The Park has long been a haven for a variety of wildlife and bluebirds are one of the flashier ones to come your way.  To accommodate them, you’ll see lots of bluebird boxes installed in various places around the Park. How many you ask? One-hundred and eight at last count!

Years ago, these boxes were installed by Wayne Davis, “Mr. Bluebird” of Kentucky. When bluebirds almost disappeared from the state in the early 1970s, Wayne stepped in to help. He experimented with many designs and found the most success with the ones he made out of old oak plank fencing from UK’s Coldstream Farm. He is credited with installing over 3,000 boxes in the Bluegrass, including those at the Kentucky Horse Park. Mr. Davis passed away in 2017, but his well-built boxes have endured.

In past years, members of the Kentucky Horse Park Garden Club have cleaned out the boxes at the end of the nesting season, so they are ready for the bluebirds when they arrive in the early spring. This year the club has broadened their scope and are participating in “Nest Watch”, a citizen science project of the Cornell Laboratory of Ornithology. The boxes have been sprayed with a bleach mixture to keep out parasites, the top of the boxes soaped to prevent wasps from nesting, and each box numbered, and GPS coordinates noted. Some nesting activity has already been spotted. A few partial bluebird nests were observed and a tree swallow feather, their way of saying “this box is taken!” has been found. Although the boxes were designed for bluebirds, they gladly welcome other cavity nesters like tree swallow, chickadees, and Carolina wrens.

Once a week, the volunteers will inspect the boxes and record any activities including the building of nests, arrival of eggs, number, and status of any hatchlings. They will also try to keep away nuisance birds such as house sparrows. All this information will be dutifully recorded on log sheets.

If you are interested in becoming a member of the Kentucky Horse Park Garden Club, contact annie.martin@ky.gov.

This site uses cookies. By continuing to browse the site, you are agreeing to our use of cookies.

We may request cookies to be set on your device. We use cookies to let us know when you visit our websites, how you interact with us, to enrich your user experience, and to customize your relationship with our website.

Click on the different category headings to find out more. You can also change some of your preferences. Note that blocking some types of cookies may impact your experience on our websites and the services we are able to offer.

These cookies are strictly necessary to provide you with services available through our website and to use some of its features.

Because these cookies are strictly necessary to deliver the website, refusing them will have impact how our site functions. You always can block or delete cookies by changing your browser settings and force blocking all cookies on this website. But this will always prompt you to accept/refuse cookies when revisiting our site.

We fully respect if you want to refuse cookies but to avoid asking you again and again kindly allow us to store a cookie for that. You are free to opt out any time or opt in for other cookies to get a better experience. If you refuse cookies we will remove all set cookies in our domain.

We provide you with a list of stored cookies on your computer in our domain so you can check what we stored. Due to security reasons we are not able to show or modify cookies from other domains. You can check these in your browser security settings.

These cookies collect information that is used either in aggregate form to help us understand how our website is being used or how effective our marketing campaigns are, or to help us customize our website and application for you in order to enhance your experience.

If you do not want that we track your visit to our site you can disable tracking in your browser here:

We also use different external services like Google Webfonts, Google Maps, and external Video providers. Since these providers may collect personal data like your IP address we allow you to block them here. Please be aware that this might heavily reduce the functionality and appearance of our site. Changes will take effect once you reload the page.

The following cookies are also needed - You can choose if you want to allow them: